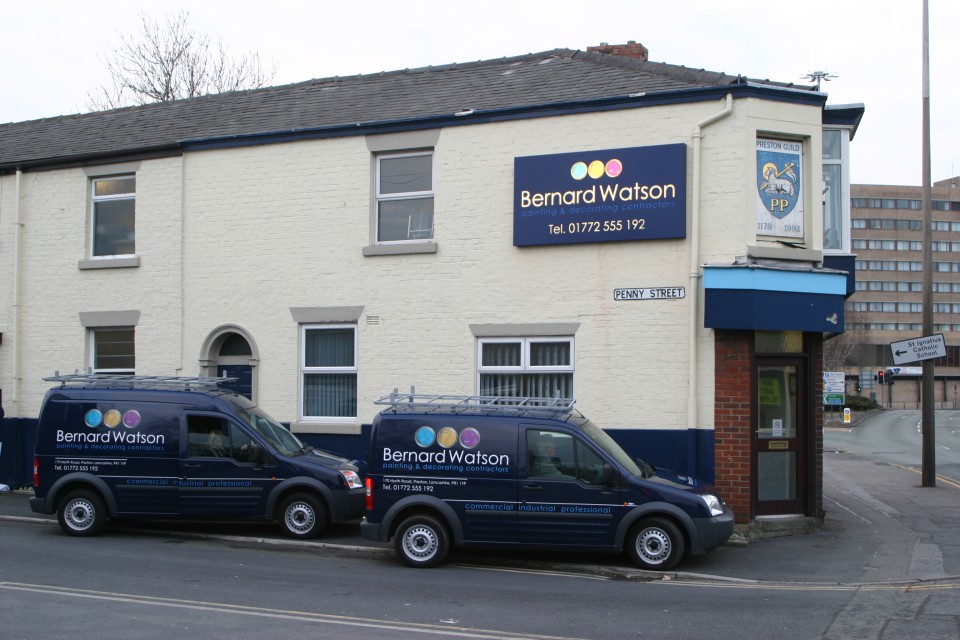 With a history that goes back over one hundred years, the specialist painting and decorating experience from Bernard Watson is second to none.

Bernard Watson was first established as John Corbishley & Sons in 1878 and passed into the hands of the current management just over a century later in 1979.

While those traditional values of almost 40 years ago still remain close to the core of the company today, Bernard Watson has moved with the times to stay at the forefront of the industry by investing in and implementing the latest technology, methods and products.

John Corbishley was the original founder of the business which was located on North Road where it would remain for 48 years. It was not until 1926 that the company would move, although not far – just across the road to what are the current premises.

Six of John’s children followed in their father’s footsteps and became directors of the business, followed by their own children who joined after completing apprenticeships in painting, decorating and plumbing. During this time, ownership of the firm passed on to John’s eldest son William who would then hand the company over to his son, also called William.

John Corbishley & Sons Ltd were renowned for their ecclesiastical work around Preston and this is a reputation which was to be carried forward by Bernard Watson.

On 1st November 1979, the company was bought by Bernard Watson who had served his time with a high class painting contractor in Preston and established his own business in 1967 after gaining further technical qualifications after completing his apprenticeships.

At the time, John Corbishley & Sons employed eight tradesman; the same number as Bernard Watson, so a total of 16 time-served craftsman remained at the firm following the amalgamation.

One employee, Beth Cribbin, was the great-granddaughter of John Corbishley. She had begun working for the company in 1975 under William Corbishley the younger, and would continue working for Bernard Watson after the take-over.

Since the new millennium & today

Astonishingly, more than 25 years after the acquisition of the Corbishley business, Bernard Watson was still employing half the original work force of J Corbishley & Sons; the remainder having left only due to retirement.

The firm won the Painter of the Year Special Interest Award in 2002/03 for the fine artwork undertaken at St Mary’s of Furness Church in Barrow, and claimed the same award again in 2006/07 for the graining and restoration of another St Mary’s Church in Lea Town. Bernard Watson won the award for a third time the following year for restoration work on the Sodality Chapel at Stonyhurst College.

Today the company is approaching it’s 140th anniversary and is still run by Managing Director Bernard Watson along with his youngest daughter Clare who joined the firm as a Director in 1997. Clare spearheaded the firm’s forward movement by achieving the prestigious Investors in People Award and a new corporate image introduced in 2008. The directors also oversaw a recent renovation of the building that’s been home to the company for almost 90 years and is a landmark in Preston’s history.